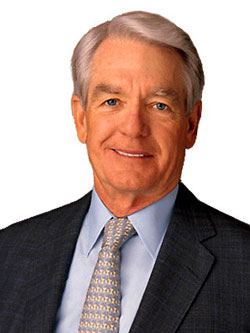 Looking for an innovative mind? An incredibly successful business plan?  A new take on the financial market?  Look no further than Charles Schwab, founder, chairman and CEO of Charles Schwab Corporation, which has helped millions of “average Joes” manage their money through investments and other banking and financial services.

In 1971, Schwab started his first brokerage office with the belief that the stock market should be open to everyone (which at the time, it wasn’t).  Yes, it was quite the alternative concept; but then again, it was exactly the kind of thing that an out-of-the-box thinker like Schwab would dream up.  So the company grew, and grew, and so did the number of investments within the market from the general public.  In essence, Charles Schwab not only started an extremely successful company, but he also revolutionized the financial industry.

Behind all these incredible achievements and innovations is a shy, yet charming, upbeat, and distinguished man, now in his 70’s, with a (mostly) hidden disability.  Despite knowing that he had extreme difficulty taking notes in class, flunking English two times, and struggling in foreign language classes, Schwab did not have a name for his disability until his son was diagnosed with dyslexia in the 1980’s (his son was in grade school, Schwab was 58).  He then saw both sides of the struggle with dyslexia—one, his own personal challenges with dyslexia; and, two, his and his wife’s challenge of getting his son the proper support he needed to achieve his dreams, learn in school, and have a healthy self-esteem.

So Schwab and his wife took action.  “Out of our own early trauma, we thought that a resource center might be beneficial for other parents, to help them understand these problems,” Charles Schwab explained to Theresa Johnston in a 1999 article for Stanford Magazine.  “That way, they can learn to become advocates for their own children.  You can’t just sit back and let things happen, or the kid can be lost.”  So they founded Schwab Learning to help the parents of children diagnosed with dyslexia, and created sparktop.org for kids diagnosed with dyslexia.  He explains in a 2003 USA Today article:

“It helps them understand their learning issues in a cartoon and entertaining way and not lose self-esteem.  It’s painful.  People decide you aren’t working hard enough or are slow.  I didn’t quit, because I was really good in other things, terrific in math and science and anything that didn’t deal with words.  I was good in sports.  I had good skills in dealing with people.”

Schwab graduated from Stanford University, with the help of his strengths in math and economics and his friends who took notes for him in class.  He continued on in school and found that his entrepreneurial skills helped him in Stanford’s School of Business—and beyond as he began his own company.  While he may be a slow reader and finds note-taking from lectures nearly impossible, Schwab is a quick thinker in many other areas.  In an interview with Richard Lee Colvin for The Los Angeles Times (April 30, 1996), he explains, “I’m real good at concepts and visualization.  I get into a meeting with business associates and I can process all kinds of stuff and get to the conclusion much faster than other people who have to go step by step, processing things sequentially.”

So how else does dyslexia affect him?  Well, mostly, it benefits him:  “I think it leads to a better visualization capability, conceptual vision,” he told Steven Moore of The Wall Street Journal (July 28, 2007, “Talking to Chuck”).  And now, after decades in the financial world, he finds that he does see those industry-related words more automatically, without the hesitation that comes when he reads a book on an unfamiliar subject.  And he gets his “reading” done on those subjects through books on tape.  “Thank goodness for all the new communications devices,” he tells USA Today writer Todd Pitt.  And thank goodness for the innovations and inspirations of this talented dyslexic.

Read more:  Charles Schwab on his own experience with dyslexia and his support of accommodations in a Letter to the Editor in The Wall Street Journal, February 14, 2000.

Note: The Charles and Helen Schwab Foundation recently transferred operations of their websites, schwablearning.org and sparktop.org, to other organizations so that the foundation can concentrate on making grants to nonprofit organizations that demonstrate “a deep knowledge of their communities and a strong commitment to improving lives.”

The content on schwablearning.org will continue to help parents struggling to advocate for their children on greatschools.org.

Professor Garfield (professorgarfield.org) operates sparktop.org, in addition to its own online games and activities for learning and fun.

Nancy Brinker, Founder of Susan G. Komen for the Cure

Nancy Brinker is perhaps best known as the founder of the Susan G. Komen Breast Cancer Foundation, now known as Susan G. Komen for the Cure. But that is only one of her many accomplishments. Brinker has also served as U.S. ambassador to Hungary and as White House Chief of Protocol and is currently the Goodwill Ambassador for Cancer Control for the United Nations World Health Organization.

Tom Cavanaugh was 71 before he saw his true reflection—not in a mirror—but in a movie.  There he was, at 17, in a scene showing a high school student completely lost looking for his hallway locker, and then spinning the combination lock repeatedly, without result.

Emanuel learned at an early age to be aggressive and stand up for himself. Raised in a family where education was a high priority, he had to read the newspaper every day to keep up with current events and defend his political opinions each night at the family dinner table. This posed no problem for his brother Rahm, former Obama chief of staff and now Chicago mayor, and Ezekiel, a breast oncologist and head of the Department of Bioethics at the Clinical Center of the National Institutes of Health. But for Emanuel, diagnosed in the third grade with dyslexia and ADHD, it was a monumental challenge. “I was on the ceiling,” he says. “The Ritalin helped, but reading was an enormous task.”

These days, Daymond John might be best known as one of the five savvy business executives (known as the “sharks”) who quickly mull over whether to invest their own money in the business ideas that budding entrepreneurs anxiously illustrate on the ABC hit television show Shark Tank.