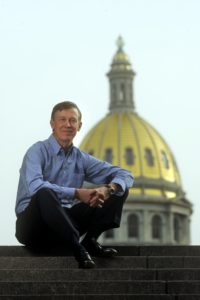 If Coloradans wanted the kind of governor they could have a beer with, they elected him. In fact, many had already knocked down a few with former three-term governor John Hickenlooper, who was a brewpub owner before he became mayor of Denver at age 50. Even his tongue twister of a name didn’t stop his unlikely ascent up the political ladder. “John Wright Hickenlooper, II. It doesn’t melt on your tongue as much as it gets lodged in the windpipe… Chickenlooper or pooperscooper were the names I’d heard a lot from kids in elementary school, which, if you ask me, are far more inspired than what I get now,” he writes in his autobiography “The Opposite of Woe: My Life in Beer and Politics.”

Hick, as he’s known, now 65, retains the mischievous aura that helped him survive that elementary school. He was undeniably intelligent, he tested well, but his slow reading and writing made him a magnet for the mean kids. In second grade Hick got glasses that allowed him to at least see things — (“Oh! That’s what leaves look like!) — but his specs didn’t help how his world saw him.

“Growing up I was the skinny dork with the Coke-bottle-thick eyeglasses. I was a petulant loudmouth, perpetually teased by my classmates… At home I was the baby. I couldn’t get a word in edgewise. I was last in line for pretty much everything. All I wanted was my voice to be heard.”

Hick’s whole family was hushed by the loss of his father when he was only eight. His father’s death left him a lonely, angry young kid with undiagnosed dyslexia dragging him down still further. He was bullied badly. He compensated with that very smart mouth.

His mother would post a socialization chart on the fridge—with coveted stars for better behavior. But by seventh grade, (though Hick was oblivious), his dyslexia was gaining on him. His mother figured out he’d fallen behind. She switched him to a private all boy’s school, but only if they required him to repeat seventh grade. Though the classes were small and he could get more attention, Hick was humiliated. He wrote that not only was he the new kid, but he felt “less than” everyone else as well.

He responded with more anger – constantly criticizing his mother, and shoplifting. Skinny as he was, he did manage to stuff several 45 records down his pants without getting nailed. Eventually, because sports were required, Hick made the soccer and baseball teams and earned some of the “attaboys” from the father figure coaches he had been craving. His intellect still compensated for his trouble reading and writing—at least enough to get into great universities. He chose Wesleyan.

Hick liked Wesleyan so much the school gave him honorary “tenure” because it was ten years before he graduated. He diagnosed his own difficulties with reading and writing. Discovering dyslexia had a name was a revelation and a relief. He still had to figure out decoding on his own.

Hick calls it “one of God’s jokes” that he has dyslexia and was always the most easily distracted person in any class. He adored books so much he wanted to major in English and become a famous writer. He nearly flunked out after his first semester. He hung on by clinging to a second semester of pass/fails.

His mother intervened again—this time with a Quaker program in Maine that would build confidence off campus. Hick was chronically restless. He helped construct one of the country’s first charter schools, he tried his hand at renovating old houses, became a landlord, and learned to make bad beer. 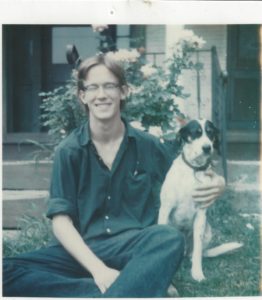 Gov. Hickenlooper while in college

He wrote his own version of “The Catcher in the Rye,” which hit the wastebasket after friends told him it was terrible—and yes, he finally had friends. When he graduated, Hick left Wesleyan after that decade with a major in geology, a self proclaimed “minor in dyslexia” and an oil industry job in Denver.

Only months after he moved out West, his job disappeared. Oil exploration crashed. Hick now needed not just a job, but a whole new career. Cobbling together 34 investors, he and partners created the pub that also brewed beer.

They bought a building in a dead part of downtown Denver. The pub was so successful the whole area came slowly back to life. A surprise new baseball stadium nearby and franchise expansion made Hick a humble multi-millionaire.

He’d learned there was a lot less reading and writing demanded in the real world. He’d discovered he was unusually creative, curious, and had endless patience and persistence when it came to solving problems. Humor went a long way toward establishing a brand—first in business, then politics.

The pub garnered delighted attention with an annual “running of the pigs.” Realizing pigs can neither sprint nor stay on track, they switched to prairie dogs. Hick became an accidental politician at 50 when he found himself the public face of retaining the historic name of Denver’s Mile High football stadium.

Originality and optimism ruled Hick’s off beat, successful political campaigns. He still smarted from being bullied as a kid. He didn’t want to attack anybody. In his first ad running for mayor, he repeatedly stepped in and out of the shower fully clad, ostensibly to soap off his opponent’s negative attacks. He turned himself into the anti-pol no one could stay mad at. Irrepressibly fresh and amiable, Hick put rare advice he remembered from his father to good use.
“He told me if you can laugh at something, it can never beat you.” And “if you can’t talk your way out of a fight, you deserve to get whupped.”

Hick did talk his way out of being whupped. He won– again and again–first for Mayor of Denver, then as a very popular Governor of Colorado. Fifteen years on, the former Governor’s staff limits all his memos to a single page.
His mind is a steel trap, but facts stick better if delivered orally. He still reads books, but only on his own (extended) time. He bikes everywhere, and with contact lenses looks 15 years younger than he has a right to. But, perhaps most importantly, Hick never forgot where he came from.

Hickenlooper revealed his own lifelong difficulty reading to help pass a bill that would screen every young child in the state for dyslexia and provide help when needed. He finally did published his memoir. And he reads from a teleprompter well enough to deliver two important speeches at Democratic National Conventions.

His words of wisdom to up and coming nerdy would be Hickenloopers?

“My advice is in a funny way, dyslexia forces you to rely on other tools to make your way through life. You will have to work harder, longer, be nicer and never quit. Don’t make enemies, it is a waste of time and gets in your way. The way I see it, the only true failures in life are not learning from mistakes, and in failing to take on the dreams we dare to dream.”

Michael Bennet comes from a family with a long history of public service. Born in Delhi, where his father was an aide to the U.S. ambassador to India, Bennet grew up in Washington, D.C., where the elder Bennet held prominent posts in the Carter and Clinton administrations and served as president of National Public Radio. Bennet, himself, is following in his family’s footsteps.

This is the first time Ambassador Carol Moseley Braun, the first African American woman elected to the senate, has ever talked about her dyslexia. She’s speaking out now to help de-stigmatize a brain difference that’s coming between kids and their dreams. Although she remains wary that any label, especially put on kids of color, can be used as an excuse for abuse.

Anne Burke grew up on the South Side of Chicago, the youngest of four children and a self-described C student who struggled with reading, writing, and mathematics throughout grammar and high school.

Gejdenson served twenty years as a U.S. Congressman from Connecticut, four years as a member of the Connecticut House of Representatives, and one year in the administration of Governor Ella Grasso. Gejdenson advises clients on international business issues through his company, Sam Gejdenson International.