Subitizing is the ability to recognize a number of briefly presented items without actually counting.

A common response to students who are having counting problems is to simply have them do daily counting practice; however, students with counting and comparing difficulties also benefit from practice that utilizes patterns and relationships. These strategies improve their ability to conceptualize and compare numbers without counting.  Data in a study of dyslexic students who had difficulty with basic arithmetic skills (Fischer B., Kongeter A., Hartnegg K., 2008) showed that dyslexic children could also improve subitizing and visual counting through daily practice.  It is important to distinguish the whole-to part process involved with this training.  Not all daily counting practice is created equal.  These dyslexic students did not achieve their gains in arithmetic merely through the process of counting.  They were taught counting strategies for many years to add and subtract numbers with little benefit to their overall concept of number.  Students made their gains because they were supplied with a whole- or gestalt then they combined subordinate parts to reconstruct the image.  Over time they improved their ability to match quantity with successively larger patterns.

(See the example strategy below.)

Woodin: The ability to identify a subordinate quantity in relation to a whole enables these quantities to be seen in a relational context that fosters comparison without employing the inefficient and often inaccurate process of counting.  The following exercise explains a whole-to-part procedure that is driven by a concrete visual model.  Using a whole-to-part model, place five pieces of cereal on a table in a canonical “: • :” pattern.  Model a subtraction event by removing pieces.  Label the process by making a subtraction sentence, then let the student replace the pieces, and label this action with a related addition fact:

Teacher: “How many are you starting with?”

-The teacher removes the center piece of cereal to leave a square arrangement.

Teacher: “Tell me what happened.”

Student: “We had five, you took away one and four are left.”

Teacher: “Say the same thing with a number sentence.”

-The teacher hands the piece of cereal to the student.

Woodin has seen impressive results from instruction that incorporates visual patterning.  Consistent graphic organizers that relate quantities to both five and ten provide the structure necessary to develop cardinality with numbers one through ten, and then extend this knowledge to the base-ten system.  Consider the following patterns that relate to the gestalts of five and ten.

Each of these icons of quantity is subordinate to the gestalt of the Ten Icon (Woodin, 1995).  Using the Ten Icon as a reference, the other icons represent a quantity of items that are visible, as well as an identifiable void that is the missing addend to make 10.  Additional shading allows comparison to 5.  For example, the Six Icon is made with a blue component of 5 and one red block: (6 = 5 + 1).  In reference to the Ten Icon, the 6 is missing a square arrangement of 4 red blocks: (10 = 6 + 4).  All of the missing addends to 10 may be driven by flashing an Icon card, asking the name of the card and the missing shape or number needed to make ten.  See an example of this technique by viewing the video below. 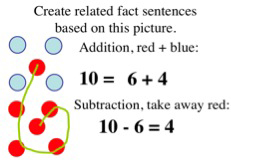 Quantities that are presented in concrete form, or represented by a diagram, are not subject to reversals.  With the circles/dots at the left, there’s no change of misreading the quantity they represent.  Consider an Arabic “4,” which can be incorrectly written in its mirrored form, versus a square pattern with an identical mirror image.  These patterns can be used to diagram addition or subtraction problems.  An “X” is used as an efficient way of producing a group of five in the following to make icons of 6 and 7.  When addition problems are diagramed with Icon patterns, the sum emerges from the two addends.  The following video clip illustrates the Icon addition process:

Patterning Should Be Extended to the Multiplication Process 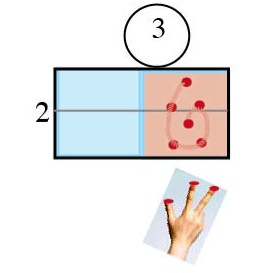 Generate the 2x facts by stamping finger patterns on a template like the one pictured above.  The teacher should write the number of fingers to be stamped in the top circle.  The student then holds out that number of fingers, dips them in paint, and stamps this quantity onto the template “two times.”  The student should first stamp his fingers at the top of the template, then duplicate the same pattern again below it.  From this student-centered location the student produces a concrete diagram of multiplication from his primary frame of reference.  The process of stamping the quantity “two times” provides the student with a concrete definition of the “times: X” multiplication operation and sign.

Use the student’s right hand to produce patterns of two times: one, two, three, or four fingers.  Have the student dip his right-hand fingers in red paint, then “stamp” the pattern twice on the red portion of the template.   The example shown above depicts stamping 2 x 3 = 6.  Dip three fingers on the right hand in red paint and stamp them twice.

The six red dots can be smeared into an Arabic “6” when done.

To stamp numbers 5 and larger “two times,” the left-hand fingers will be needed.  Dip the left-hand fingers in blue paint, then extend additional right (red) fingers necessary to match the number.  The stamped quantities of fingerprints display a chunked depiction of the product that aligns with base ten place value.  A blue pattern of ten will be produced on the left in the ten’s place.  Additional red prints will be produced on the right. 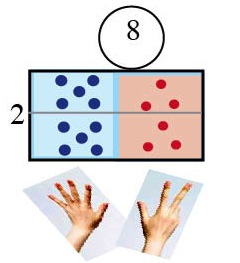 Extend all left-hand fingers and dip them in blue finger paint.  Extend three right-hand fingers and dip them in red paint.  Stamp both hands (two times) on the paper.  By stamping all eight fingers two times, the student will create the product: 1 group of ten blue fingerprints on the left–in the ten’s place, and six red prints on the right–in the ones place: “2 x 8 = 16.”  The following movie demonstrates the process of creating the 2x products with the finger-stamping technique.

Using a Clock Face To Chunk and Organize Information

Download the Graphic Organizer for this Exercise. Click here.
Chris Woodin has graciously allowed us to offer PDFs of some of the graphic organizers he uses in his classroom. To see more organizers and information, click here.

The 12 clock positions of the analog clock may be used to learn and compare the 5x facts.  This is accomplished through a series of gross motor kinesthetic activities that initially place the student at the center of a large clock dial, facing the 12 position. From this student-centered location the student internalizes the relative number locations from his primary reference frame.  Minute values are then associated with these positions.  Clock positions are merged with minute values to create 5x multiplication facts in a relational context.  As the student points to the 3 position of the clock, both the number 3 and minute value of 15 may be simultaneously held in memory.  The internalized structure of the clock also provides a student with the ability to simultaneously access several facts so they may be compared.  This ability is particularly useful when dividing.  For instance, if a student were able to visualize 37 between the benchmark minute values of 35 and 40, he would be able to determine that 37 cents would be made with 7, not 8, nickels.

In the following video, students will use the familiar structure of the clock to learn about the 5x fact family within a relational context.  Students learn to interact with the analog clock dial from within their primary reference frame, and then externalize this structure to a paper-and-pencil task.  Ultimately, they are empowered to create and compare 5x facts.

Tell us if you have your own strategies for your students.  Click here.

One educator in Connecticut suggested this for learning the 9 facts: When multiplying the numbers 2 – 9 by 9, the two digits in the resulting answer will add up to nine.  So, for instance, 5 x 9 = 45 (4 plus 5 adds up to 9). It’s a good way to check your answers.

Christopher Woodin is a specialist in the field of mathematics and learning disabilities.  A graduate of Middlebury College and Harvard Graduate School of Education, he has taught extensively at Landmark School in Massachusetts.  At Landmark School’s Elementary/Middle School Campus, he holds the Ammerman Chair of Mathematics.  Christopher served on the Massachusetts Department of Education’s Mathematics 2011 Curriculum Framework Panel, and teaches graduate-level professional development courses during the summer through Landmark’s Outreach Program.  Chris was the 1997 Massachusetts Learning Disabilities Association (LDA) Samuel Kirk Educator of the Year.  He has presented at numerous international LDA and International Dyslexia Association (IDA) conferences, and has led math workshops to audiences across the country.

Christopher has published The Landmark Method of Teaching Arithmetic ©1995 and several journal articles.  His latest project, Multiplication and Division Facts for the Whole-to-Part, Visual Learner: An Activity-Based Guide to Developing Fluency with Math Facts, is currently in press and due to be released in 2012.  This comprehensive text features the methodologies and many of the activities that are described on The Yale Center for Dyslexia & Creativity’s website.  To learn more about Mr. Woodin and his work, please visit his page on the Landmark School website and his own website.

Students with slower processing speeds or executive-function problems are often no different from their peers in math proficiency in first and second grade; but as they confront multistep computations in upper elementary school tests, their scores tumble because they lack the skills necessary to produce organized, efficient output.

Math-specific concepts seem to be particularly difficult to master. In addition to being abstract, these concepts contain terms that confound students with visual similarity or auditory similarity between homophones.

Often an educational evaluation will describe a dyslexic student as having “low working memory.”

Since the YCDC website began in 2007, we have received many requests about how best to help dyslexic students struggling with math.