“I was relieved that I had a diagnosis, but I still was not completely sure of what it meant to be dyslexic…”
-Hope Fleming 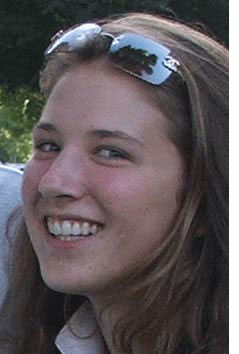 Ever since I can remember, I have been passionate about success.  Whether it was a gold star or a check plus, I would go the extra mile in order to ensure that my success was acknowledged.  Throughout my early years in school I got lots of check pluses and gold stars.  I attended a small, intimate K-9 school and knew my peers inside and out.  But as I grew older, I began to notice that my learning pattern was different from that of my classmates.  I was certain that they weren’t achieving success greater than mine, but it seemed as if they were attaining it faster and more easily.

I first realized this disturbing fact with certainty in sixth grade.  It was also the first time that we were split up into sections based on our mathematical abilities; I had been placed in honors, the highest of the four sections.  I was, of course, extremely pleased when I learned of my placement; but that one moment, however, was the highest level of confidence that I would experience all year.

Each day, my math teacher would put problems on the board and ask us to solve them, and each time it seemed as though I had just written the problem down in my notebook when the first hand shot up.  I was bewildered—I didn’t understand how my friends were able to do the problems at the speed that they did.

No matter how quickly I attempted to work through a problem, I was always so far behind.  I started to give up, knowing that I would never finish in time.  I became increasingly concerned with my academic image, so I began to raise my hand when I didn’t even have a solution to the problem, and pray that I wouldn’t actually have to be the one called on to solve it.  Although I felt stupid for the first time in my life, I didn’t want my classmates to think the same.

In tenth grade I began studying at a prestigious boarding school near my home, and my academic insecurities only multiplied.  In addition to my math woes, I was struggling in other subjects as well.  My dad often found me surrounded by books when he came to wake me up for school, because I had fallen asleep despite my best efforts to complete my assigned homework.

I became convinced that I had Attention Deficit Disorder, but my parents were reluctant to proceed with testing since my academic track record was so strong.  Until this point, I had always performed exceptionally and although I was now receiving only mediocre grades, they reasoned that the standards at this school were much higher than those of my previous school.

When I was diagnosed with dyslexia, I was relieved.  Before, I had blamed my various failures on inferior academic abilities.  After the diagnosis I began to believe for the first time in a long time that I could adequately do the work and compete with my peers if given an appropriate amount of time to do it and do it well.

Even though I was relieved that I had a diagnosis, I still was not completely sure of what it meant to be dyslexic.  I didn’t write B’s instead of D’s, which I thought was what dyslexics did.  What I learned is that dyslexics take a longer time to read.  This means doing most homework will take longer for me than my non-dyslexic peers.

When we notified my school of my disability, I immediately received accommodations in order to put me on an equal playing field of sorts.  Most importantly, I was allowed time and a half on all of my tests and end-of-semester exams.  As I began to utilize these accommodations that I had been granted, my grades skyrocketed.  Between the extra time and my modified study habits, I felt like a new student.

Before my diagnosis, I had trouble starting my homework and often procrastinated despite my desire to complete the assignments.  Soon after being diagnosed, I was told that this was not uncommon behavior for someone in my situation.  Starting my homework caused me to become anxious, because I knew that it was going to take me longer than it should.  I attempted to alleviate my stress by not beginning my assignments at all.

Once I became aware of my dyslexia, I was able to break this frustrating cycle.  Now I knew that I was just not meant to complete my assignments in a “normal” amount of time.  I began to actually study more, because I no longer felt like I had to complete tasks based on the time it took other students to do something.  Additionally, I found that studying late at night helped me due to its isolating effect.  Without other students around, I didn’t have to spend time worrying that other students were finishing faster.

For the first time in my high school years, I began to get A’s, which only reinforced my newfound work ethic.  I finally got the recognition and success I craved and knew I was capable of achieving.

Hope Fleming graduated from Bates College in 2009, majoring in Spanish. She Has since transitioned to a successful career in finance and currently works for several firms in Boston, MA.

She says that if she had been diagnosed with dyslexia at an earlier age, her accommodations excusing her from foreign language requirements at school would have had her miss two great joys and interests—Spanish and Latin—just because they were not dyslexic-friendly subjects.  “You never know what you are capable of until you try,” says Hope.