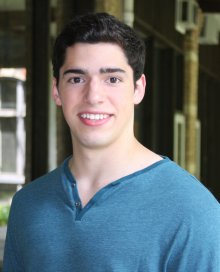 Izer’s dyslexia has only made him more determined.

Izer Martinez still remembers that reading circle. He’s about six, and one by one each classmate is taking a turn as it ticks down to him. He’s panicking. There’s no way out. Everybody is about to discover–“Oh my god, he can’t read.”

Izer’s parents told their son he just needed “the right setting”—through eight different Chicago schools in eight years. Even after his diagnosis with learning differences in third grade, all the schools struck out. Izer has dyslexia and auditory processing issues, but most immediately painful for young Izer was his speech—he couldn’t pronounce the “r” sound, so he couldn’t say his own name.

On the plus side, one of Izer’s doctors also told his parents that Izer was a “social genius”. He used that as a defense. He covered his deficits with distraction so nobody would notice the perpetual new kid couldn’t keep up.

Finally in seventh grade, Izer’s parents found that “right setting”—the Gow School for Dyslexia and Learning Disabilities, a boarding school for boys in Buffalo, New York. He was overjoyed to find others like himself. Not only was Gow teaching Izer to read, he got speech therapy, too. Gow believed it might take Izer four years to tackle the “r.” They didn’t yet know the new Izer. He didn’t let up on the exercises. Six months later he recalls running all the way across school grounds to show his speech teacher he could say his name for the first time. Ize-R-, Ize-R-.

He was introducing himself to the world. Izer became driven to tackle his dyslexia the same way. He not only started really reading and writing, he became a poet—a rhyming poet.

With his increasing abilities came opportunities. Izer was chosen to participate in a National Institutes of Health “Step Up” program that offered experience in Cancer research. He won honors from the National Dyslexia Society. As a senior, he was named a Gates Millennium Scholar. Fifty-four thousand seniors apply for that full college scholarship; only one thousand are chosen.

At 18, Izer is a new freshman at the University of Pennsylvania. Izer invents new learning strategies daily. He’s trying recording his spoken thoughts for a paper before he writes it. Izer takes lecture notes with a four color pen so he can prioritize information visually. He writes all over

“I am just going to be the one who doesn’t give up. No, it doesn’t come easily. But I am the kid who is willing to put in more time and work harder than everyone else. I am not going to give up no matter what, because I am going to succeed. I don’t expect it to be easy.”

his books (he says it’s like discussing the reading with himself) and immediately summarizes chapters. He uses the internet to look for pictures or music on any subject because he learns more thoroughly through sights and sounds. And now, reads aloud to himself all the time. It helps the material “stick,” Izer says, because it’s more like being in a movie. His dyslexia has only made him more determined.

“I never say I am intelligent. I am just going to be the one who doesn’t give up. No, it doesn’t come easily. But I am the kid who is willing to put in more time and work harder than everyone else. I am not going to give up no matter what, because I am going to succeed. I don’t expect it to be easy.”

Listen to an audio version of this page